After weeks and weeks of two very loose front teeth, Karina made the brave decision to pull out her own tooth last Friday. Earlier last week, the other very loose front tooth fell out while she was eating, but its pair held on for the next few days by a very, very strong root. Her new teeth were beginning to grow in, and we were hoping it would fall out naturally. But, this was a very stubborn tooth!

So, last Friday after lunch, Karina sat in the dining room with a group of the tias. She was determined to get the tooth out, but was extremely nervous about the pain and the blood. After about 10 minutes of crying and trying to pry the stubborn tooth out by herself, the tias convinced Karina that a better idea was to use string, and that way she could get it out all by herself. And, after some panicking, Karina was convinced that this was the best, quickest way to get this very stubborn tooth out!

So, after we put ice on the tooth, Karina asked for a countdown and pulled the string. She pulled her tooth out all by herself! Karina was extremely excited and proud of herself, but I think she was most excited about the ice cream she got after! 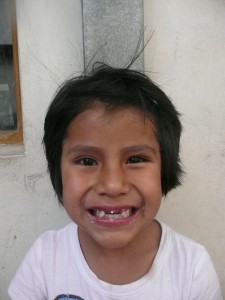 Karina after losing both her front teeth!