I’m behind on my blogging, so I’m going to cheat this week and combine two topics into one:) Yesterday was International Women’s Day, and something that certainly needs to be celebrated and honored here in Bolivia where women are still so marginalized and discriminated against just because of their gender. My last week’s blog slipped away from me in the midst of a million and one things, but it would have contained my observations and perspectives on our most recent trip to Mizque. So I thought maybe I’d just meld the two and share some stories of both heartache and hope that impacted me most… 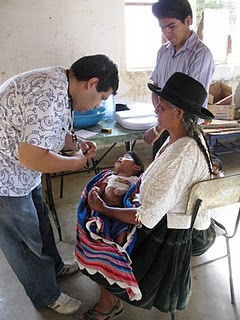 This grandmother came in with her grandson to have a consult with our doctor while we were in Buena Vista, a community just outside of Mizque. You could see the exhaustion on her face as her pleading eyes looked to Marcelo for some answers about this little boy. Her daughter died giving birth to him in a complicated pregnancy in a place where maternal mortality rates are one of the highest in Latin America, and access to adequate medical services is scarce. Despite the sweet spirit evident in this elderly woman who has taken on the care of all of her grandchildren orphaned by this tragedy, you could also sense her despair as she received the news that her grandson has microcephaly and there is no medication or operation that could cure him.
This case rests heavy on my heart as his delicate state will mean a short life if he stays within this community, but if he leaves and gets the holistic care he needs here in the city, he’ll be completely separated from everyone who’s ever loved him because they lack the finances to be able to come in and visit him. 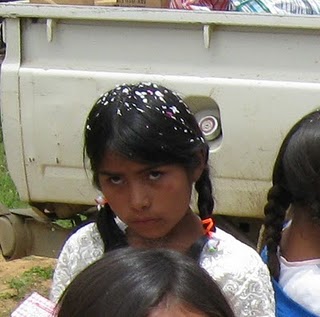 As a visitor, I was struck by the incredible beauty of the small village of Calera, located on the top of a mountain with some of the most stunning panoramic views I’ve ever seen. However, I wasn’t on vacation, and I was quickly called back into reality as the doctor settled down to start his consults. I sat in, not so much to help, but to get a better sense of the state of the families in this new community.
One of the families that came in for check-ups brought their oldest daughter pictured above, she has vision problems caused by lack of oxygen just after birth. Her teacher says that she can do the work, but must write in big letters on the chalkboard in order for her to see, and that she has no night vision. Without a specialist’s examination we can’t know the extent of her vision problems, but she would need to be able to come to Cochabamba to do that. In light of the reality that there was little chance of her being able to do that, our doctor asked if could they at least give her lots of carrots to increase her vitamin A intake. The look on the mother’s face was truly heartbreaking as you could tell that she wanted to say that they would be able to do that for their daughter, but the reality was that they couldn’t even afford that, let alone get her any sort of medical attention.
Although I’ve lived here for five years now, I am still surprised at how easily I can forget just how severe the poverty is here. Carrots aren’t expensive, and they are grown relatively close by in abundance in the valleys of Mizque, but when you live on a mountaintop and have no vehicle, just the prospect of getting the vegetable is a daunting task. I hope that we are able to do something for this sweet little girl, as her prospects in life are considerably limited without having vision issues, but so much more so with limited sight. 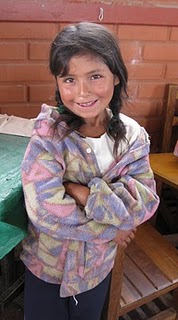 ‘
I met this little girl also in Calera, and she pretty much stole my heart the first time she flashed me that gorgeous smile. This girl came in all by herself to see the doctor, something most kids her age wouldn’t dream of doing, but we came to learn that she is used to doing things on her own. Her story brought to light a cultural reality here that when a child loses their mother, they are considered to be orphaned, even if they still have a father in the picture. The community there, including her teacher, referred to her as an orphan and when asked who takes care of her then, the teacher said that she just kind of stays with different people in the community because her father isn’t able to care for her. Life is already so hard for young girls in Bolivia, and so much more so for those growing up without the security and protection of a strong family unit. 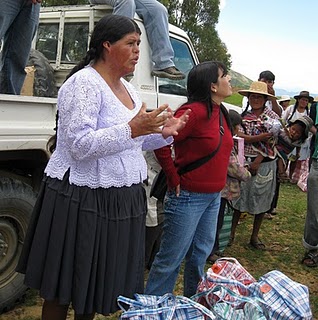 Pictured above is one of the most amazing women I’ve met. Benita is one of the two teachers at the community school and became the emcee, community representative (even though the actual community leader was there), and our much needed translator for the medical consults. She has such a wonderful spirit about her that we were all instantly captivated by her. Her love for her students was evident in her interactions with them during the student presentations and her willingness to take on the responsibility of giving medications to some of the children she knew wouldn’t get them consistently if they were given at home.
I think what I most appreciated about her was her willingness to be completely honest with a bunch of strangers. It is a part of the culture here to tell people what you think they want to hear so as not to offend them, and it’s not considered lying, but rather polite. So the fact that she was willing to go against that cultural norm and tell us what was really going on with the situations of the children that were being seen by the doctor was very appreciated and very helpful in being able to give accurate diagnoses. It also gave me the ability to know with certainty the reality of this community- access to water, medical attention, education, etc.- instead of having to gather information through my limited time for observations and gleaning from non-direct conversations. It also bodes well for future collaboration with this community as we can know that she will be open and forthright in both the needs and abilities of the community. 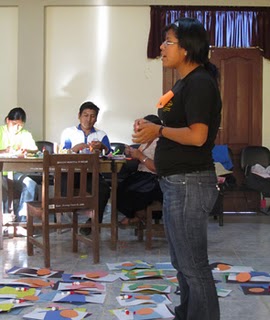 My last highlighted woman is our own Evelin from Pedacito de Cielo. This trip was a milestone in the foundation because it was the first time that we had one of our staff being able to share their knowledge and training with others outside of the foundation. This has been a long-term goal for us, and for me personally as the person responsible for the training of our staff, and the training that she put together for the rural daycare staff in the Mizque area was an overwhelming success. What a proud moment for all of us who’ve invested so much in Pedacito de Cielo and in Evelin to become such a confident and capable instructor! We’re excited to see this area expand and have more opportunities for Evelin and other staff  to share their expertise with these other educators in resource poor areas.
My heart remains torn… broken by the many seemingly hopeless cases of children in need, children that at this point we are unable to intervene and help have their needs met… and yet hopeful at the long-term vision of people like Evelin and Benita creating a better future for these children.
Kimber